A downloadable simulator for Windows and Linux

The weight-shift control model and a proper multi-body physical simulation of this simulator make it very distinct from traditional aircraft simulators and perfect for simulating ultralight aircraft like hang-gliders.

Desktop (non-VR) version is available here on Itch.io for free. The hang-gliding simulator was originally developed as a VR teaching aid in a hang-gliding course with realism and piloting exercises in mind. Hardware components were made out of real hang-glider parts. The software was developed specifically for this purpose because existing generic flight simulators do not simulate weight-shift controlled aircraft accurately enough. Therefore, custom aerodynamics and rigid body setup were developed in Unreal Engine 4. To our knowledge this makes it the only simulator of its kind in the world.

Current simulator design enables VR experience in both the sitting and the full hang-glider rig setup with multiple realism options. It can also be run as a standard desktop flight simulation. Future plans include spectator mode for training and real-time flight analysis, multiplayer for group soaring exercises, higher realism in thermals simulation and rendering, and much much much more…

VR variant is available via Patreon tiers (see "More information" for the link to Patreon page).

I wanted to make a troubleshooting doc but haven't had the time. The sim works only with vulkan, no opengl, so usually on Linux it runs fine if you can get sensible output from 'vulkaninfo' command. Unfortunately all my test machines are also development machines and I guess Unreal Engine installation gets all the drivers it needs to run so I'm not experiencing those issues. Hope you can get it to work, good luck! :)

I'm sorry to post that here, but it drives me crazy.

I switched from using the 450 to the 460 nvidia driver, and now I can launch the game. However, it's suuuuper slow, and I can only have a black screen, with the menu ui, I can very slowly select and click on buttons, go to other menu ui, but all I see in the background is a black screen, nothing else. The issue is that vulkan doesn't seam to work properly, however, I triple checked my hardware and it's compatible with vulkan, I have a Nvidia Geforce Gtx 950M and my drivers are up to date, but it still doesn't work any better. 'Vulcaninfo' gives me the right infos(I think, I'm not 100% sure). And it's the exact same with other games that use the Vulkan shader, I can't run Beamng drive with proton for example, even if it's supposed to be supported. My setup is: intel core i7, NVIDIA Geforce GTX 950M, 8G memory it's strange, if I switch from using my Nvidia card to using only my intel smaller graphic card, the behavior of the game is the same, my cpu is almost maxed out... After some loooonnng researches I saw that it might be that the nvidia drivers don't support switching from one card to another on linux, but I still have no idea how to solve that problem, all the things I've tried failed successfully lol... edit: I'm almost sure that the game doesn't use my main graphic card, its gpu utilization stays almost at the same level when I launch the game, while the cpu usage explodes. Any idea how to make sure the game runs on my Nvidia graphic card instead of my intel smaller graphic card ?

I completely reinstalled vulkan and it works now, expect that it crashes after ~30 seconds in the actual game, so my issue is sort of solved ? thanks for the reading ;)

Do you have any idea of why I'm struggling so hard ? Is my setup good enough for this sim ? how did you install vulkan on your linux machines ?

A lot, lot quicker now - thank you.  I still struggle with mouse controls though, can I PM you?

Just noticed this message. I'm glad you contacted me regardless. Thank you, working on the controls update...

Cheers, Linux Mint 19 requests Vulkan driver. Any recommentation regarding driver version? Many thanks in advance!

Hi fredsch, I'm not sure I know the right answer. On desktop and laptop I test on I have Ubuntu with NVIDIA drivers (I just use the latest) and everything needed for getting clean report from 'vulkaninfo' console command.
I just asked a friend about running on Mint and he asked which graphics card you have in your machine? If you want I can forward your computer specs to him and he'll figure out what you can do to make it work.

Thank you for your quick reply! Desktop PC

This struggles on my PC (i7 24GB memory, used to be a reasonable graphics card) so much its unplayable - any options to reduce things to speed up?

About the framerate there are currently only two things that can be done. Firstly, choosing Seaside Collect Game from competition section gives better performance because there are less atmospheric FX in that scenario. And secondly, pressing F11 while playing will exit fullscreen, you can then resize the simulator window to make it smaller which will increase the fps. The simulation currently needs to have at least 40 fps for physics to work correctly.

That said, on nVidia GTX 1070 it runs at around 100 fps. CPU and memory are not that much important. Mostly the graphics memory. But that will also improve in the next month or two.

Cheers, yes I also noted things weren't responding as I expected! Will have to check on video memory but will try other tips. Would be good if could include in information on game when have a moment :-)

Yes, that might be a bit under-powered. But already the next update will have some optimizations to allow for lower specs. Probably in the next couple of days or even tomorrow.

As for the controls, a tutorial is planned for the future but there isn't one yet. In short, hang glider is controlled by weight shift. It's similar to rocking a boat. If you shift your weight to one side the glider leans to that side and starts turning. Leaning forward makes it dive and gain speed, and backwards makes it climb and loose speed like going up hill. Keep the speed above 40kph and enjoy! :)

Yes, familiar from flying hang gliders in real world. My instinct was to use mouse as per this and Hangsim, ie move the mouse as I would the basebar. I think that is how intended here as well, once get frame rate up!

BTW any possibility of a more pilots eyes view option ? Could just be a selectable position closer in and below the hang point.

All looks great, wish you success in your dev!

Numbers 1 through 6 change different camera views. 1 is first person in which case controls are inverted and mouse moves the speedbar. Controls can be inverted with CTRL+I though. And holding TAB key while in game displays all key bindings.

A substantial performance upgrade is included in the latest release. Hope it fixes the issue. Cheers!

Nice, thank you! Hopefully will get an opportunity this weekend to try out.

Not running on my pc

Sorry to hear that. The most common reason for not being able to run the simulator on Windows are missing DirectX binaries and/or Windows Update. Both can be easily found on Microsoft support pages. Or you can try Linux version of course. If that doesn't help, please follow the "community" link in "More Information" section above and give more details on the issue you're experiencing. 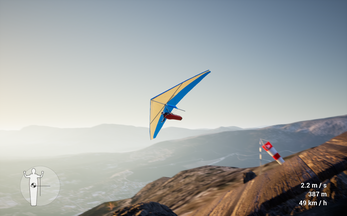 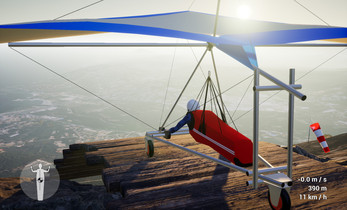 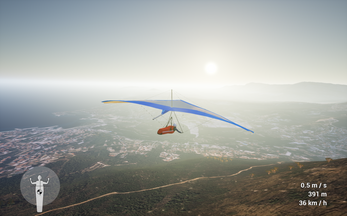 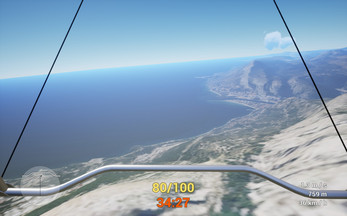 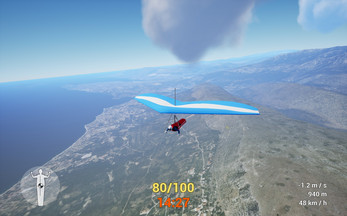 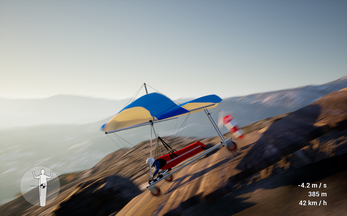 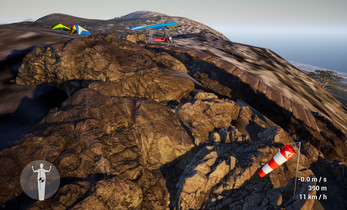